They sat side by side. The monochrome from the garden lamp cast two shadows on the ground- their contours only inches away from just brushing past each other. Their figures were settled so comfortably against the background that it seemed as if the cold night had awaited their warm smiles for long. They smiled; eyes fixed, not on each other, but on the million little dots of brilliance that studded the sky.

His shoulders relaxed a little, his breath humming a whisper in his chest. She sighed, as if to affirm the soft, sweet ache in their hearts.

She shifted her eyes towards him and felt a slight flutter in her stomach. His eyes were glazed, wide open and joyous; lips slightly parted, posing an innocent smile- one of awe and wonder. Her neck touched the back of the bench and she let her head rest on it. She lay with a smile, with the starry impressions still shining in her shut eyes.

He moved his gaze towards her and felt his breath slip a little. Her eyes were lidded as if to protect a secret dream though her smile revealed all hidden desires. Strands of her hair were entangled with the bushes behind and her head was awkwardly placed. But the shadows seemed to embrace her with such delicacy and the light touched her so subtly that her flaws were only pronounced beauty.

He reached out to tuck her hair back in, but she opened her eyes. As she looked, a soft light entered him. A single tear slid down her cheek. He moved nearer to her and held her close. She buried her face into his shoulder. He wept some tears that fell upon the skin of her arms that cradled tiny drops with care before they trickled down. Soon, their faces were streaked with glittering drops, reflecting the light of the stars. They shined with all their might, fearing that their journey wouldn’t last too long.

The wind moaned a song softly, brushing past his ears. The insects joined in the symphony. The night sky blanketed him well and the stars lulled him to sleep.

She was already fast asleep- lost in a dreamy trance that went deeper than the night.

The rays of dawn made his eyes blink off the sleep, squinting to be accustomed to the invading light. He accepted the settling sunlight, but with reluctance.

Slowly, he got up, shuffled some steps-back slightly bent with age. He gave a longing glance to the bench, now emptied of any joy.

And there she was again with a blanket in hand, walking towards him. “Father, it’s getting colder by the day. You need to stop coming here every night,” she said. “She’s been dead for years,” she added gently.

He looked at her, at the eyes and flowing hair that she had inherited. He shrugged and accepted the blanket with a smile.

He knew, he would return by the night again.

“She’s been dead for years.”

No, she had lived for him. 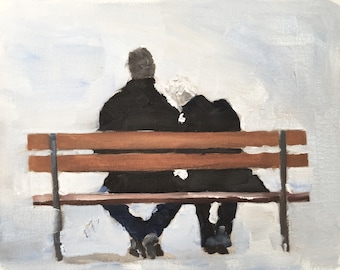