The wind blew the coppery autumn leaves in wild twirls. The clouds blushed in the soft rays of the Sun. Squirrels scurried past, with mouthfuls of nuts, preparing for winter…

I stood there, my bare feet rested on the comforting texture of the soil. A single tear trickled down and fell in the ground- a tribute to the memories. As my fingers traced the skin of the tree, now roughened with age, a smile complemented my reminiscent tears.

This tree, standing tall and lush with pride, was the only one that survived…The only one in the desolate landscape of concrete which had once been home to an impenetrable forest of beauty, to adventurous times and memories of three friends.  This was where dreams began, where life was weaved… and here was where a struggle was born. The blood of martyrs had poured through the very soil I stood upon. 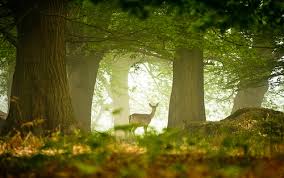 It had been ten years since then. But every memory was etched vividly in my mind. I remembered the trees, big and proud ones. We had cherished them, loved them and lived with them. I remembered our long afternoon walks by the stream…

“Maa says that when it rains, souls pour down from heaven and when they touch the ground, they give life to the seeds and make them sprout… isn’t that fascinating?” Amit had said, looking up at the sky in amazement. I remember we had spent the afternoon there, by the stream, our childish curiosity sunk deep in that thought.

Amit, Raheem and Arun- our names had translated to friendship. Our childhood had bloomed and blossomed in the labyrinthine paths of the jungle, and we had been christened by the very air, the soil and the greens abound. Its wondrous mysteries had been our solace, peace and shelter.

Until one day…Until that one fateful day, and the terror that it had preceded.

Those men, deceitful me, had smiled and spoken ever so politely, their heinous motives invisible to our innocent eyes. We had led them to the elders, and hid behind the cottage door, hoping to hear what the curiously clothed men had to say. The men had cases full of sheets with weird imprints on them. The men had spoken in our tongue, deceitful men. But they had only received remarks of guttural disapproval from the Panch. And more sweet talks fetched them only more noises of denial. That day the men had left frustrated, but only come back again…

Each day when they had returned, the voices of our elders felt more submissive. We had heard them! The deceitful men, and their vicious plans, heard them lure the greed to their currency notes and hollow talks of a brighter future.

And that one fateful day, the Panch had sold our lives, our joy to death as black as the ink they pressed upon the sheets. We had cried and cringed, moaned and wailed, wept and fought…!

Her hand was firm but soft, as she held me from running away. I saw a tear sparkle behind her lowered lashes. “Arun, listen, we can do not nothing about this, son.” “But it’s our forest Maa! They cannot cut it down, I won’t let them!” My tiny wrists continued to struggle in her grasp. She cried silent tears and hugged me closer.

“Raheem, your hand is slick with sweat!”

“I know. I’m scared! They have huge monstrous things. They’ll kill us!”

“So let them. We won’t see our home be destroyed. Our jungle needs us. Even if nobody does help us, we won’t be scared!”

“Yes. “ The three of us whispered in unison, holding hands, linked around the bark of the oldest of all trees…

We waited, our breaths gushing I and out with tremors. The terrible honks of the machines tore through, the loathsome roars approaching closer.  Soon, they came into view, slashing and crushing away the poor innocent plants. We clasped our hands tighter, hearts beating frantically. The noise came to a halt before us, blowing up dirt… and dread.

A man got off, walked towards us, another deceitful man. He told us to go back, we shook our heads. He repeated, his voice stern. He threatened, booming thunderously. Raheem chocked back a sob, his hands trembled.  But Amit… he stood straight, fearlessness gleaming in his demeanor as his eyes challenged the enemy. I tried to look as fierce as him.

The man uttered insults and sent for the elders. Soon, all villagers appeared around us, but hesitance was set deep in their eyes. Our mothers cried out our names, calling us back, their voices breaking. Determined, we disobeyed. We knew, they had tears hidden behind the veils on their sweet faces.

Engines roared to life and chugged towards us, giving us ample time to flee. But we shut our eyes and held on.  Somebody screamed. Maa, maybe. I heard footsteps scramble towards us. I felt an arm on my hand, not to pull me away but to hold it tight. We opened our eyes to see a chain of people standing, linked, arm in arm, to give back what righteous children of the forest should.

They ran towards us. Beat us with sticks, men and women alike…Dragged us away, pulled us apart, and tried to break our will by mere blows to our bodies.  Warriors we were, and fight we did.

Soon, I lost sight of my friends. I continued to kick and hit and bite. The air was dusty. The earth trembled. Every now and then, I heard a wail or a cry of pain. My people fell before me. My body was shaking.

“Raheem! Amit! Maa!” I cried. I felt an arm pull me away. My mother took me to a little clearing by the stream. And there lay Raheem, a cut in his thigh bleeding profusely. Maa washed his wound and caressed him with soft words. Where’s Amit? I thought. I peered through the trees to find him… his head bobbed towards me, covered in sweat and dirt.  “Raheem’s hurt! Come, fast!” I shouted to him.

He quickened his sprint. Suddenly, a yellow machine whammed into a tree, breaking it down. I screamed. As it prepared to strike again, it geared forward, leaving behind a small bloody body. There he lay, crumpled… soaked in red.

With a jolt, I flicked open my eyes, my vision blurred with tears. I was lying against the oldest of trees. I looked at my trembling hands, now mature with adulthood. On them I could still feel the warmth of my friends’ hands, the touch of the trees, the texture of the ancient soil… and the blood of my brethren.

I wore the same clothes as the deceitful men, but my feet were bared to the earth where I belonged. The city lights meant no more to me than illusionary lustre, for I had known better.

Yet I had chosen to dwell in the concrete, built upon the sacred soil. Yet I had chosen to breathe the stale air that had polluted the once whispering winds. Because nothing else filled me with more pride that this tree, standing majestically even today… It had held its roots upon a land of sacrifice and of love. It couldn’t be maimed, much less be cut.

…The legends of a struggle, of warriors of an unsung battle shall be carved upon the skin of history. Its grief shall resonate in the corrupted hollows of humanity. And it shall be alive, living in the breath of the survivors.